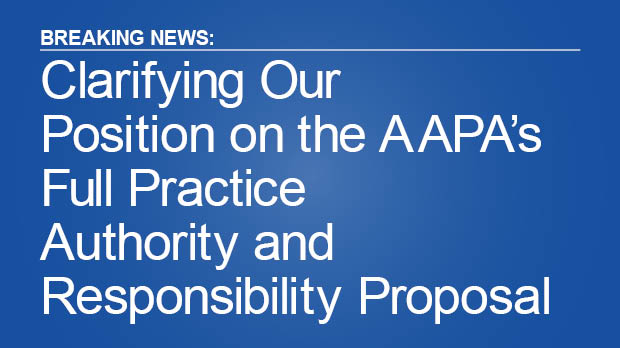 The SDPA recently released a position statement in response to the American Academy of Physician Assistants (AAPA) task force’s proposal to pursue full practice authority and responsibility (FPAR) for the PA profession. We encourage every SDPA member, dermatologist, and others with vested interest in PA practice to take the time to fully understand the intention behind this proposal as it relates to licensure, viability of PA job opportunities, and inclusion in the increasingly more corporate ownership and management of medical practices.

The PA profession was built on a team-based approach to medical practice, which the SDPA and the task force proposal continues to recognize as foundational to our goal of providing patients better access to care as a part of a healthcare team. The FPAR proposal set forth by the AAPA task force would place responsibility for defining and regulating PA licensure, practice, and disciplinary action upon a state PA licensing board comprised primarily of PAs who have the best knowledge of PA education, training, and legislation. The FPAR proposal, as defined for individual PAs, asserts that PAs should continue to practice as part of a team with physicians and other providers, practice to the highest level of their education and training, and most importantly, recognize the limits of their knowledge and abilities. It also seeks to place liability and responsibility on each individual PA for the care that he/she provides, rather than requiring a physician to accept that undue burden under the current “supervising physician” rules (www.news-center.aapa.org/fpar/). It is important to note that the SDPA has suggested an edit to the proposed FPAR language from AAPA to make clear that we remain committed to “team-based practice, rather than autonomous care.”

A recent example of legislative action similar to the FPAR proposal occurred with Michigan House Bill 5533, which was enacted in December 2016. The updated legislation removed physician responsibility for PA practice, making each member of the healthcare team responsible for their own decisions. The bill also removed the limitation on the number of PAs that may practice with a physician, which allows for each physician to build their healthcare team to meet the needs of the patient population they serve. Lastly, the bill recognizes PAs as full prescribers rather than limiting their prescribing ability to delegation from a physician, which mirrors the DEA policy that considers PAs individual prescribers (www.legislature.mi.gov).

Changes in the healthcare system are proving to be less favorable for PAs in comparison to our nurse practitioner (NP) colleagues due to the requirement for PA licensures to be linked to physicians and their licenses. One of the main goals of the FPAR proposal is to establish state PA licensing boards with a voting membership comprised of PAs that will allow for our involvement in licensure, regulations, and disciplinary action for our own profession. This model mirrors that of NPs, which are governed by state nursing boards with the best understanding of NP education, training, and legislation. Physicians are similarly governed by medical boards comprised of physicians.

Model legislation for NPs, which has already been adopted in twenty-one states and the District of Columbia (www.aanp.org/legislation-regulation/state-legislation/state-practice-environment), provides full practice authority to NPs and has seemingly been less controversial in the dermatology community. What does that mean for PAs in those states? PA licensure is often more cumbersome and less efficient due to the requirement for a physician to agree to the state’s supervisory or collaboration terms before the PA license can be issued and the PA can begin seeing patients. Employers in these states have begun to preferentially hire NPs over PAs simply because it is easier for them to hire and more quickly utilize NPs to increase patient access to care. Additionally, the rapid rise of corporate owned medical practices has affected the willingness by physicians, who are now employees of the practice, to accept PA collaboration/supervision agreements and the liability that they imply. Physicians who are employees, rather than owners or stakeholders, in a practice are less likely to accept the liability of PA supervision because the corporation reaps the majority of the benefits from adding a PA to the clinic staff.

Collectively, these issues pose a serious threat to PA opportunities in the workforce when compared to our NP colleagues, in all disciplines of medicine including dermatology. A prime example of this issue revolves around the Department of Veterans Affairs’ (VA) December 2016 rule to allow for NPs to exercise full practice authority in order to allow veterans to have direct access to care provided by NPs within the VA system (www.va.gov/opa/pressrel/pressrelease.cfm?id=2847). The ruling will undoubtedly provide a larger set of healthcare providers to offer more timely care for our nation’s veterans, which is long overdue. However, the regulation was not inclusive of PAs (whose practice is governed under a different title in the law), and has great potential to negatively affect the ability for PAs to secure employment in the VA system until a new ruling is passed. The lack of full practice authority for PAs, in this instance, has created a clear gap in the ability of PAs to contribute equally to increased access to care for veterans. This same scenario can be applied to any healthcare system or corporate practice to demonstrate how full practice authority, or lack thereof, plays a vital role in our ability to join forces with our physician and NP colleagues to meet the rapidly changing needs of our patients.

The SDPA, as a whole, has the responsibility to advocate for the practice of PAs in dermatology, both today and in the future. Our support of FPAR reflects the need to support the evolution of PA practice as it relates to the healthcare team and protect the viability of our profession, not a desire to practice apart from the dermatologists whom we learn from at all stages of our careers and with whom we share our passion for excellence in dermatologic patient care. We fully recognize the value of the dermatologist-PA team in providing more timely access to care, ongoing collaboration, and lifelong learning as all members of the healthcare team seek to better the lives of the patients we serve.

CLICK HERE | Additional Information Regarding the Initiation of the FPAR Proposal