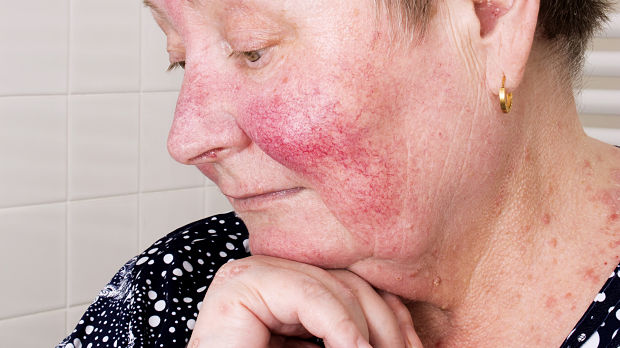 Photodynamic therapy (PDT) is a field directed treatment of actinic keratoses (AKs) or “pre-cancers”. Treatment involves application of a photosensitizer to the affected area followed by application of blue or red light. This treatment is commonly used on the face and scalp of patients with significant actinic damage. It is typical for patients to have erythema and pain after treatment with PDT. Rosacea is a common chronic cutaneous condition which may present with erythema, flushing, telangiectasia, acne pustules and papules and rhinophyma. Many patients who present with actinic damage may also have rosacea, therefore, it is important to note some patients treated with PDT may have a flare of their rosacea.

A case report published in Open Access reviewed a patient with a history of facial and scalp rosacea and who was treated with PDT for AKs on his scalp and forehead. Previously he had treated AKs with prescription topical treatments without complete remission, therefore PDT was suggested. The patient had erythema in the immediate period after treating with PDT and a typical inflammatory reaction.

At two weeks after treatment, however, the patient presented with numerous papulopustules on the scalp and findings consistent with ocular rosacea. Recognizing the flare of the patient’s rosacea, low dose doxycycline was initiated and rapid improvement was accomplished within 10 days. The authors of the study conclude pain and inflammatory reactions as common with PDT but rosacea a rather uncommon unwanted side effect for which typical treatment of rosacea is successful.

Original adapted from: Wollina W, Bitel A, Vojvodic A & Lotti T. Rosacea flare- up after photodynamic therapy for field cancerization and a review on adversed events with PDT in general. Open Access Macedonian Journal of Medical Sciences 2019: 7 (18):2998-3001.