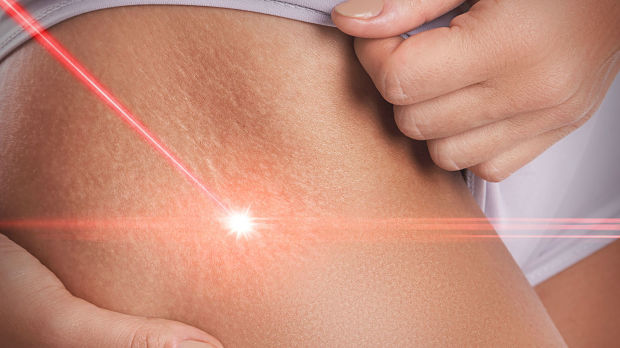 Striae distensae (SD), also known as stretch marks, is a condition that is both distressing to patients and difficult to effectively treat. The currently available treatments are not reliably effective and there is no standard treatment that has been established.

In a small single–center clinical trial, authors attempted to further the data by reassessing the safety and effectiveness of fractional, non-ablative 1565 nm laser therapy on SD using new objective and subjective assessment tools. The participants were treated three times with a fractional, non-ablative laser in 4-week intervals and clinical outcome was evaluated at baseline, 1-month, and 6-months. Participants also completed subjective questionnaires and objective assessment was done via digital photography and three-dimensional analysis employing PRIMOS! and VECTRA!

The results showed that overall, the use of fractional, non-ablative 1565 nm Er: glass laser treatment was an effective and safe treatment of SD. The objective measures showed that skin relief improved significantly throughout the study, the SD lesions improved, and the adjacent skin became more homogenous and appearance was smoothed out. The most significant change was observed between the baseline and 1-month follow-up, and improvement remained at 6-month follow-up. Patients also reported significant changes in life quality.

The authors note that despite the effectiveness of this treatment, in most cases, the SD will remain visible as streaky lesions, and patients’ expectations should be managed before therapy.