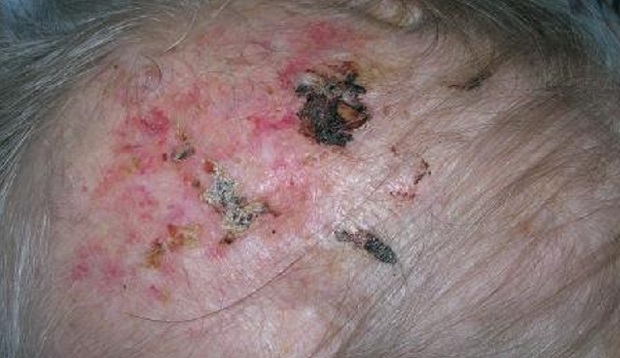 Are you missing this scalp presentation? Erosive pustular dermatosis of the scalp (EPDS)

Erosive pustular dermatosis of the scalp (EPDS) is an uncommon disease of the scalp that is often misdiagnosed.   Presentation of this condition  typically occurs between the ages of 60 and 70 in both men and women.  Clinical findings of EPDS include pustules, erosions and  erythema in sun damaged skin of the scalp.  The vertex and crown of the scalp are most commonly affected.   Eventually patients may present with  thick yellow crusting  with or without hair loss. Of note, many patients are asymptomatic in presentation.   A small percentage of patients complain of burning, itching and discomfort.  First line therapy is high potency topical steroids for several weeks to months. Unfortunately, the condition tends to wax and wane and patients need to be educated about the likelihood of recurrence.

A recent retrospective study aimed to understand the misdiagnosis of EPDS in order to try to improve diagnostic delay.  This small case series revealed the most commonly misdiagnosed conditions were  actinic keratoses, basal cell cancer and squamous cell cancer.  Features such as erosions and crusting are common in both skin cancer and EPDS, revealing the difficulty in differentiating between the two conditions.  Additionally, both conditions tend to present in the same population.  For example,  in this study,  all patients diagnosed with EPDS also had a history of diagnosed skin cancer.

Features such as erosions and crusting are common in both skin cancer and EPDS, revealing the difficulty in differentiating between the two conditions.

Furthermore, this case series examined the use of trichoscopy as a useful adjunct in the diagnosis of EPDS.  Trichoscopic features of EPDS include “absence of follicular ostia, dilated vessels, and perifollicular serous crusts”.   These features are not exclusive to EPDS, however, as some of these features are also evident in ill-defined non-melanoma skin cancers. The absence of other dermoscopic findings  specific to non-melanoma skin cancers were reviewed. Misdiagnosed patients in this study  were most commonly treated with topical treatments aimed at the treatment of actinic keratoses/non-melanoma skin cancers. This finding is significant as these treatments tend to worsen the condition of EPDS.   The authors of this study conclude diagnosis of  EPDS is difficult to diagnose properly.   They recommend further evaluation and use of  clinical and trichoscopic features in helping  clinicians arrive at the accurate diagnosis.