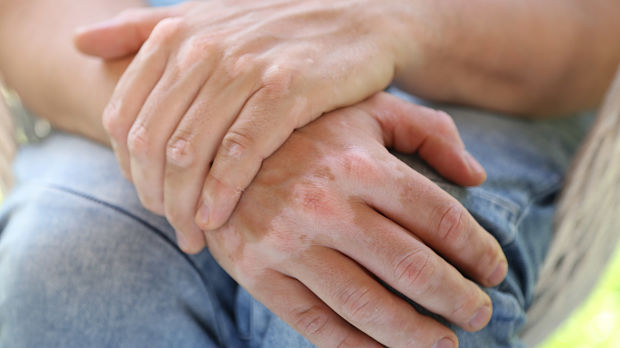 Which Comorbidities Most Commonly Accompany Vitiligo?

Specific conditions that are often found in conjunction with vitiligo include autoimmune thyroid disease (AITD). AITD has been reported to occur with much higher prevalence in patients with vitiligo and the risk of co-occurring AITD is more than twice as high than in the general population.

Alopecia areata also affects patients with vitiligo at a higher rate. Studies have confirmed a significant association between the two, with overall rates ranging from 0.5 to 12.5%.

Diabetes mellitus also affects patients with vitiligo at a rate significantly higher than the general population. Patients with generalized vitiligo are at much higher risk than those with localized disease.

Other autoimmune diseases that may co-exist with vitiligo, but the evidence is less conclusive, are pernicious anemia, systemic lupus erythematosus, rheumatoid arthritis, Addison’s disease, and inflammatory bowel disease. In addition to these autoimmune conditions, the authors note other comorbidities including ocular and audiological abnormalities, psoriasis, and atopic dermatitis.

There are conflicting studies about psoriasis and the comorbidity with vitiligo but the association between atopic dermatitis and vitiligo is strong.

The authors conclude that the literature provides evidence of an association between vitiligo and comorbid autoimmune, ocular and auditory, and dermatological disorders, particularly autoimmune diseases. They state that care providers must be aware of comorbidities in vitiligo, especially autoimmune thyroid disorders, to improve disease burden and quality of life in patients with vitiligo.