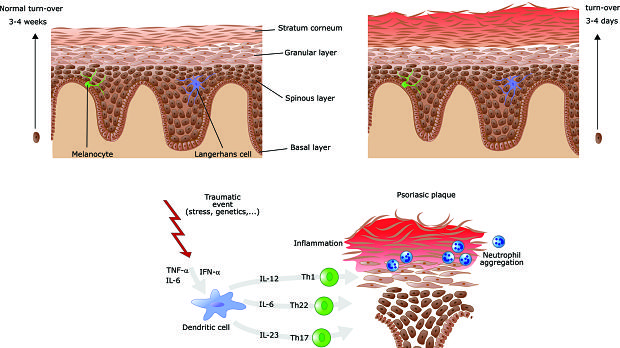 Is IL-23 the “Master Regulator” of Autoimmune Inflammation?

Our understanding of autoimmune inflammatory diseases such as psoriasis has increased dramatically in recent years, especially in regards to the pathophysiology of disease. Developing treatments that target T-cells and their corresponding cytokines has led to increased effectiveness when fighting these diseases.

A recent article looked at the role of IL-23 in such diseases. IL-23 is considered the “master regulator” of the immune-inflammatory response in psoriasis and other inflammatory disorders because of the way it maintains the population of cytotoxic Th17 cells that produce pro-inflammatory cytokines including IL-17 and IL-22. The authors explain that blocking IL-23 may be more effective than blocking IL-17 because IL-17 production by innate non-T-cell lymphocytes is important for preserving intestinal epithelial integrity and some tissue repair mechanisms. When IL-23 is targeted instead, production of IL-17 is impaired but not completely eliminated, possibly because other cells produce IL-17 independent of IL-23 stimulation. This means that cells can mount a defense against infection even as the IL-23 response is blocked.

The authors further note that targeting IL-23 instead of TNF-a may be beneficial for lowering the risk of tuberculosis or hepatitis reactivation, as well as ‘paradoxical psoriasis’ or psoriasiform eruption. They conclude that results of emerging studies suggest that selectively blocking IL-23 in treating psoriasis offers high levels of efficacy, a favorable safety/tolerability profile, and the convenience of infrequent dosing. The authors state that IL-23 blockers represent an important step forward in the continued evolution of the treatment landscape.