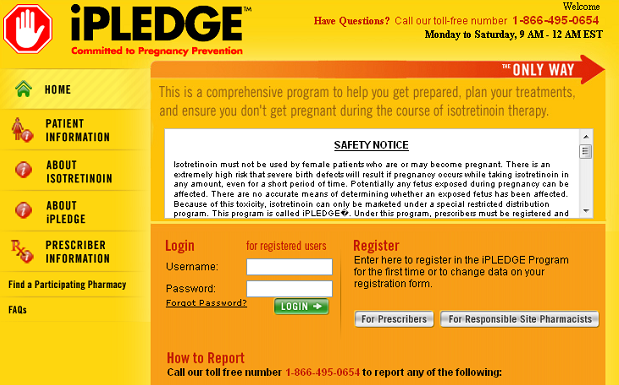 Patients who suffer from severe acne present with painful nodules and cysts that can lead to scarring. It can be a difficult condition to treat and often warrants systemic treatments for clearance of  these acne lesions. Isotretinoin is a  Vitamin A derivative medication  that is highly effective for  treatment of severe acne.  Isotretinoin is teratogenic– there is an extremely high risk that severe birth defects will result if pregnancy occurs while taking isotretinoin in any amount, even for a short period of time during pregnancy.   Due to this risk, patients who take isotretinoin are monitored with the iPLEDGE system.

The iPLEDGE system is a computer-based risk management program designed to eliminate fetal exposure to isotretinoin through a special restricted distribution program approved by the FDA. The iPLEDGE system also evaluates mental health symptoms.   There have been widespread media reports linking isotretinoin  to reports of depression, suicide, and other psychiatric effects, though very few studies  have examined the risk of psychiatric adverse events other than depression and suicidality while taking isotretinoin .  A recent retrospective study evaluated reports of psychiatric adverse events for patients who take isotretinoin.

The researchers state that “although depressive disorders and suicidality were frequently reported with isotretinoin use, these reports must be considered in the context of elevated rates of depression and suicide among patients with acne at large.”  The data in this study revealed that completed suicide was lower in patients taking isotretinoin than in the  general US population.   The study revealed no causal link between isotretinoin and psychiatric risk but found that  patients taking the drug “appear vulnerable to psychiatric concerns.”  Moreover, the  mandated monthly iPLEDGE visits may provide an opportunity to screen patients for psychiatric conditions and improve outcomes.