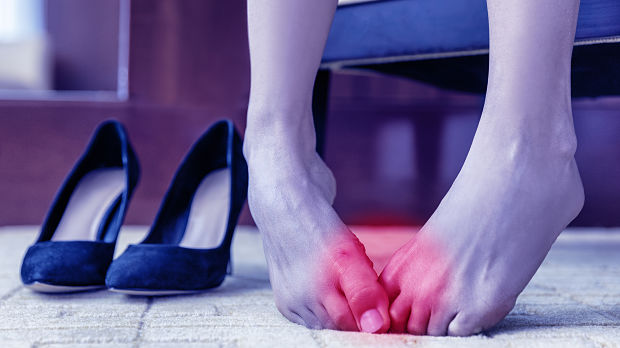 Dermatitis caused by footwear is a form of contact dermatitis that results from the foot’s exposure to shoes. A number of factors contribute to dermatitis: such as chemicals in shoes, differing materials used to line shoes, and the hot, humid environment that comes with wearing closed shoes. But, contact dermatitis that results from shoes should be distinguished from dermatitis on the feet that may be from psoriasis, atopic dermatitis (AD), or juvenile plantar dermatitis. Because these conditions may present with similar features, the correct diagnosis and treatment of footwear dermatitis can be challenging. A recent study sought to further define the prevalence, epidemiology, and clinical features of foot dermatitis in children.

Over a study period of 10 years, 52 children who had foot dermatitis exclusively were compared with 337 other children who were patch tested in areas other than the feet. The results showed that contrary to previous studies that showed an association between AD and foot dermatitis, the prevalence of AD was low in this population. Most children in the study were diagnosed with allergic contact dermatitis (ACD). Other diagnoses after patch testing were atopic eczema (23.1%), and juvenile plantar dermatosis. The patch testing to determine allergens revealed that metals were a common culprit, specifically potassium dichromate. Chromium salts have been used to treat leather, but have recently been subject to restrictions in the EU, so the authors expect that ACD due to exposure will likewise decrease over the next few years. Other allergens included thimerosal and adhesives, though six of seven cases of allergy to adhesives were actually due to medical wound dressings.

Based on the results, the authors conclude that patch testing any child with foot dermatitis is important when an allergic cause is suspected. They point to signs that include symmetric involvement of both feet, involvement of maximum footwear contact locations, and chronic dermatitis with acute flares of vesiculation. Involvement of the plantar flexure crease, lateral aspect of the feet or the footpads is likely to fit with a non-ACD cause of foot dermatitis.