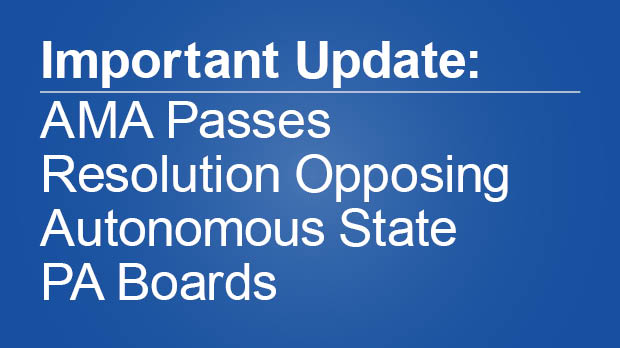 OTP reemphasizes the PA profession’s commitment to team-based care and reaffirms that the degree of collaboration between PAs and physicians should be determined at the practice level. Simply put, we believe that individual physicians and PAs should have the ability to define their team-based practice agreement, rather than have it mandated by antiquated state laws with no regard to the PA’s level of training and experience. This does not mean that PAs should practice independently, contrary to concerns raised by the dermatologist community. The SDPA asserts that dermatologists and PAs, as well as physicians and PAs in all specialties, should be able to work together to establish practice-specific guidelines.

OTP also advocates for the establishment of autonomous state boards with a majority of PAs as voting members to license, regulate and discipline PAs, or for PAs to be full voting members of medical boards. PAs are currently regulated by separate PA boards in Arizona, Iowa, Massachusetts, Rhode Island and Utah and by semi-autonomous boards in California and Texas, none of which have advocated for “independent practice” as is feared by those involved with the recent AMA resolution. PAs serve as medical board members in 19 states, but we believe that we should play an active role in our profession in every state. PAs are the only medical professionals who are largely underrepresented in our own state licensing and regulatory boards. We have the best knowledge of our education, training, limitations, and insight into issues that may be introduced in legislation with potential to affect the profession as a whole.

At our meeting with the AAD in the spring, the SDPA board pointed out that physicians are becoming more likely to be employees of a practice rather than owners. A recent study by the American Medical Association (AMA) finds that less than half of practicing physicians own their own practice. Since the study was first conducted in 2012, physician practice ownership is now no longer the majority arrangement. The rapid decline in physician-owned practices has created a problem for the PA profession in regards to employment. Previously, physicians who owned their own practice could see great benefit from employing a PA. However, recent trends have shown that physicians who are also employees of a practice are much less likely to accept supervisory requirements for a PA, thus making it more difficult for PAs to find employment. In 22 states and D.C., nurse practitioners do not have to enter a supervisory agreement with physicians, which makes them easier to hire and puts PAs at an increasing disadvantage in the healthcare marketplace. This is a problem that expands far beyond our small world in dermatology and has affected PAs in all specialties across the country. We seek these changes to ensure that the PA profession remains viable in the healthcare workforce, not to eliminate our valued relationships with physicians.

The SDPA is disappointed in the passage of this resolution and the clear opposition from dermatologists for modernization of PA practice. Despite our many attempts to reiterate our continued commitment to team-based care, we obviously still have a great deal of work to do. It is our hope that we can continue to advocate for the PA profession by educating our dermatologist colleagues on the difficulties PAs face in the changing healthcare landscape. We encourage you to maintain an open dialogue with your collaborating dermatologist so that we can best understand each other’s perspective and reinforce our shared commitment to team-based practice.