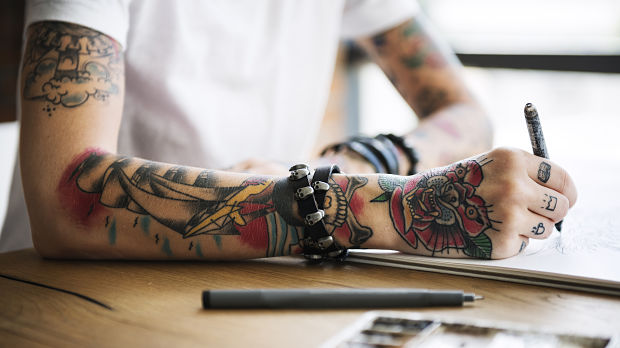 Tattoos are a popular form of self-expression, but their growing popularity is highlighting the need to manage and identify skin reactions, infections and even skin cancers that may appear within a tattooed area.

A recent study reviewed the literature on the clinical presentation, histopathology and treatment of squamous neoplasms, particularly Keratoacanthoma (KA) and squamous cell carcinoma (SCC), arising within tattoos. The authors were able to identify 24 reported cases of squamous neoplasms arising within tattoos, 15 reported as KA and 9 reported as SCC. The authors note that differential diagnoses for some of these lesions ranged from contact dermatitis to malignant melanoma. They also state that histopathological evaluation should be performed in all tumors arising within a tattoo.

There were various hypotheses about what might have encouraged the development of the neoplasms: formation of cutaneous malignancies secondary to trauma arising from the tattooing procedure or tattoo-induced scarring, a chronic inflammatory reaction to the pigmentation, or potential carcinogenesis from the pigments (specifically red pigments). In some cases, trauma from tattooing was followed by rapid development of a KA shortly after the procedure. In other cases, a local immune response after transepidermal elimination of tattoo pigment suggested KA may be the result of a reactive rather than neoplastic process. Chronic inflammation that occurred after tattoo placement was also associated with development of SCC. The authors stated that it may be possible to determine whether a lesion is a KA or SCC based on the time of development; those that develop within a year of tattooing are most likely KA, and those that develop years later secondary to chronic inflammation are most likely SCC.

Based on the review, the authors conclude that while squamous neoplasms arising in tattoos may be an unusual phenomenon, they should be included in the list of potential cutaneous complications related to tattooing.