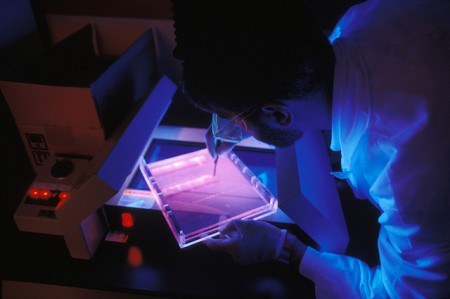 Researchers Identify a New Weapon to Suppress the Spread of Melanoma

A potent new weapon in the fight of melanoma was discovered in what is believed to be the largest epigenetic analysis to date of cell-signaling molecules in early-stage melanoma.

Researchers at NYU Langone Medical Center and Laura and Isaac Perlmutter Cancer Center detected cell-signaling molecules in melanoma cells, called “microRNAs” known as miR-382 and miR-516b, both of which showed tremendous potential for suppressing the spread of melanoma. This could be crucial for the future targeting of melanoma cells that have a high likelihood of spreading.

Detection of the suppressor microRNAs emerged from the analysis of more than 800 of them found in tumor tissue samples from 92 men and women with melanoma. Some 48 of the patients had aggressive cancer, while the rest did not.

“Our study results show the suppressive effects of two specific microRNAs in melanoma that are less active in aggressive, primary tumors,” says cell biologist and senior study investigator Eva Hernando, PhD. “Going forward, our goal is to show how we can use this information to identify patients more at risk of aggressive disease, and see whether early, more intense therapy improves survival from melanoma,” says Hernando, an associate professor at NYU Langone and Perlmutter Cancer Center.

Perhaps the most promising realizations to come out of all this is the possibility that the effect of microRNAs with regard to suppressing melanoma tumor growth will apply to other types of cancer as well. When that happens, the global medical community will have a potent new weapon in the fight against cancer.