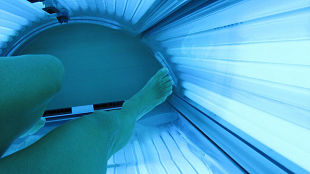 Behavioral addictions take many forms. The recently revised Diagnostic and Statistical Manual of Mental Disorders states that the fundamental feature of a behavioral addiction is diminished control over a behavior that subsequently becomes disruptive, problematic, or harmful to an individual. This leads to urges or cravings for the behavior that are difficult to resist. The use of indoor tanning beds (IT) may lead to symptoms of an addiction to tanning among a subset of frequent IT users. Previous tanning addiction assessments were developed by adapting existing substance addiction assessments. Researchers have raised concerns about their validity and noted that the assessment results do not appear to correspond to actual tanning behavior.

A newly developed tool, the Behavioral Addiction Indoor Tanning Screener (BAITS), uses a behavioral model to capture the experience of diminished control and urges with regard to IT. Scoring criteria classify participants as symptomatic of IT addiction based on their responses. A recent study sought to examine the validity of these classifications. IT users who screened positive on the BAITS were compared to those who did not on The Structured Interview for Tanning Abuse and Dependence (SITAD) clinical assessment and IT behavior was assessed 6 months later.

Participants who endorsed two or more BAITS items were likely to be diagnosed as tanning dependent on the SITAD and reported IT with greater frequency. The validity of the BAITS to identify IT users with symptoms of tanning addiction was supported by the study results. The authors state that the BAITS is a promising screening tool and could be utilized for classifying IT users as symptomatic. The authors suggest that clinicians and healthcare providers could use the BAITS to identify patients in particular need of counseling to avoid IT.