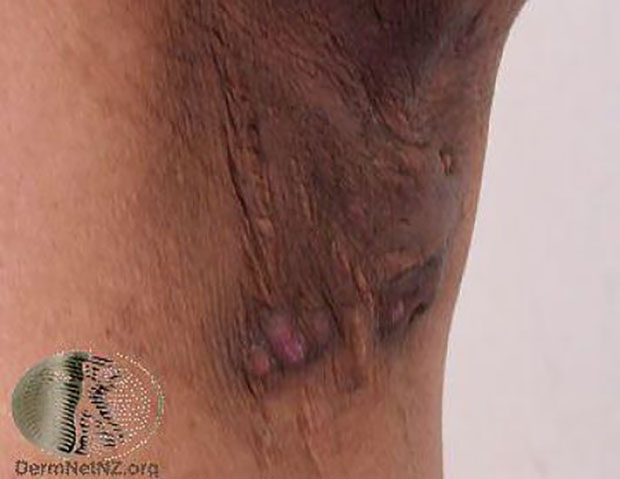 Is There A Long Lasting Treatment for Hidradenitis Suppurativa?

As the severity of hidradenitis suppurativa (HS) increases, the success of treatments are inversely related; severe cases prove most difficult to successfully treat. Using the Hurley system, which relies on clinical appearance, grade III HS is characterized by extensive disease with fistulas, sinus tracts, and scarring in multiple locations. Previous studies have found that mild cases can be effectively treated with topical disinfectants and systemic antibiotics such as tetracyclines and beta-lactam antibiotics, but severe disease is much more challenging. One study found that using a triple systemic antibiotic combination cleared up 100% of HS grade I, but only 16.7% of patients with severe grade III HS saw improvement of their disease.

A recent study looked at whether wide surgical excision is the best option for reducing inflammation, local recurrence, and improving quality of life for patients with severe HS. Seventy-four patients (40 male and 34 female) with axillary and/or inguinogenital/gluteal HS Hurley grade III underwent wide local surgical excision and were followed for 14 years to determine whether the treatment was effective and to evaluate impact on quality of life.

The results showed that 70% of the patients were either very satisfied or satisfied with the final cosmetic result and surgery was also effective in improving the patient’s quality of life. The results also indicated that the recurrence of HS disease in surgically treated areas is rare, though in some cases HS appeared in areas that had not been previously affected. The authors conclude that for patients with severe HS, surgery should be considered the first-line therapy because of the potential of offering a local cure.