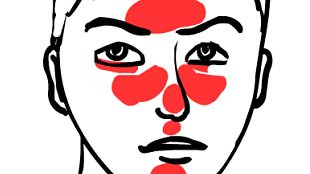 Is Rosacea an Independent Risk Factor for Developing Parkinson’s Disease?

A large cohort study of the Danish population investigated the risk of incident (new-onset) Parkinson disease in patients with rosacea. Rosacea is a common chronic inflammatory skin condition with four recognized subtypes of rosacea that frequently overlap: (1) erythematotelangiectatic, (2) inflammatory papulopustular, (3) phymatous, and (4) ocular. The pathogenesis of rosacea is not fully understood, but it is know that the condition has a genetic component. Rosacea skin shows an upregulation of various cytokines and displays increased activation and expression of matrix metalloproteinases (MMPs). Matrix metalloproteinases have also been implicated in the pathogenesis of Parkinson disease and other neurodegenerative disorders. In a previous study of patients with Parkinson disease, rosacea was present in18.6% of the participants and that 31.4% reported facial flushing associated with temperature changes. The cohort study sought to evaluate the possible association between the two conditions in a nationwide cohort of the Danish population between January 1, 1997, and December 31, 2011.

The authors conclude that rosacea constitutes an independent risk factor for Parkinson disease. This association could be due to shared pathogenic mechanisms involving elevated MMP activity. However the authors emphasize that these findings are hypothesis generating; the basis for the pathogenic link between rosacea and Parkinson disease is still unknown. They note that although the MMP hypothesis is intriguing, there may be other mechanisms that contribute to the observed association.