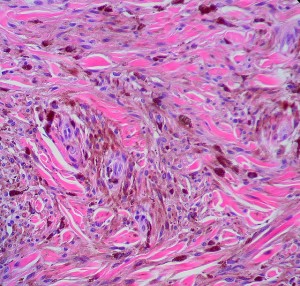 Is More Better When it Comes to Predicting Melanoma Survival?

Having many pigmented skin lesions (i.e. nevi or moles) is a known risk factor for melanoma. However, in a recent study, authors examined the impact of nevus counts on melanoma survival in more than 2000 patients and found that high nevus counts were actually associated with favorable prognostic markers and a higher 5- and 10-year survival rate.

In the retrospective study, published in the International Journal of Cancer, researchers analyzed 2,184 melanoma cases from three European studies. The results showed that having high number of melanocytic nevi at time of melanoma diagnosis is an independent predictor of better disease-specific survival. This protective effect was also observed in patients with positive sentinel nodes. Overall, melanoma cases with a high nevus count showed a reduction of 57% in melanoma-specific mortality compared to those with low nevus count after all adjustments. The authors speculate that future research may show that the genetic determinants of nevi number may be associated with biological differences in melanoma tumors. Specifically, the authors postulate that high nevus count are associated with longer white cell telomeres, which might be a marker of delayed deterioration of cells of other lineages. Hence, the theory is that longer telomeres in immune cells from patients with many nevi might, therefore, be beneficial.

Clinicians should be aware that though high nevus counts increase melanoma risk, it also appears to have a favorable independent prognostic significance in patients with melanoma. Clinicians should be encouraged to record nevus counts in patients with melanoma in clinical practice to assess the role of the nevus phenotype in melanoma survival, as well as responses to immunologic and gene-targeted treatments.