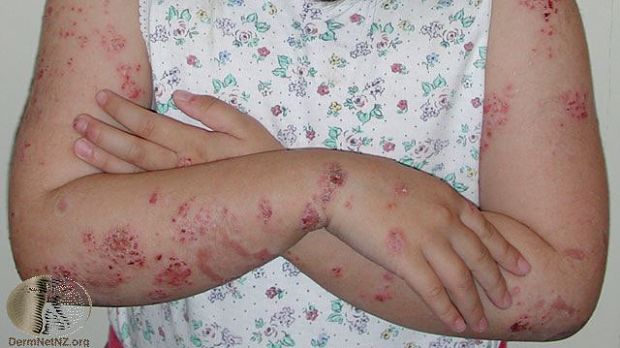 Patients aged 2 and older have a new option for treating their mild to moderate eczema (atopic dermatitis). AD, often called eczema, is a chronic condition impacting nearly 18 million children and adults in the United States.  Approximately 90 percent of people living with AD have the mild to moderate form of the condition.

The FDA recently approved Eucrisa, a Pfizer product, the first non-steroidal topical monotherapy that is a phosphodiesterase 4 (PDE-4) inhibitor. The exact mechanism of how Eucrisa works is not fully defined, but crisaborole, the active ingredient in Eucrisa, may inhibit PDE-4 in target cells. This reduces the production of pro-inflammatory cytokines thought to cause the signs and symptoms of atopic dermatitis.

Two placebo-controlled trials were conducted to determine the safety and efficacy of Eucrisa. 1,522 participants ranging in age from two years of age to 79 years of age, with mild to moderate atopic dermatitis, were part of the trial. The results showed that participants receiving Eucrisa achieved greater response with clear or almost clear skin after 28 days of treatment; some saw improvement in as little as eight days.

Mild side effects including application site pain, burning or stinging were reported. Patients who have had a hypersensitivity reaction to crisaborole should not use the product.

Source: Pfizer and FDA
Adapted from the original FDA and Pfizer press releases.