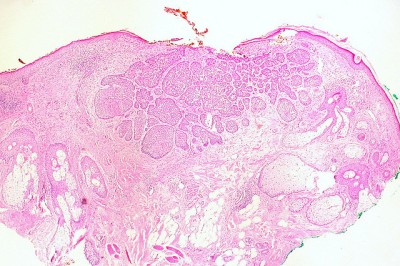 According to the National Cancer Institute, the number of new cases of non-melanoma skin cancer appears to be increasing every year. Basal cell carcinoma accounts for approximately 80 percent of non-melanoma skin cancers. Locally advanced basal cell skin cancer are basal cancers that have not spread to other parts of the body, but cannot be treated with surgery and radiation. Basal cell carcinoma can also recur after treatment. However, there is a new treatment that may stop or reduce the growth of these cancerous lesions.

The U.S. Food and Drug Administration has approved sonidegib (Odomzo), a pill taken once a day, that works by inhibiting a molecular pathway, called the Hedgehog pathway, which is active in basal cell cancers. Richard Pazdur, MD, director of the Office of Hematology and Oncology Products in the FDA Center for Drug Evaluation and Research, said in a press statement, “Thanks to a better understanding of the Hedgehog pathway, the FDA has now approved two drugs for the treatment of basal cell carcinoma just in the last three years.”

Odomzo (marketed by Novartis) established efficacy in a multi-center, double-blind clinical trial with 66 participants. Results showed that 58 percent of patients treated with Odomzo experienced partial or complete shrinkage of the tumors. This significant effect lasted at least 1.9 to 18.6 months, and approximately half of the responding patients’ tumor shrinkage lasted six months or longer.

There are some serious side effects and Odomzo carries a boxed warning for pregnant woman. Both male and female patients should be warned about these risks and advised to use effective contraception. Odomzo also has the potential to cause musculoskeletal-related side effects.

Adapted from the original press release