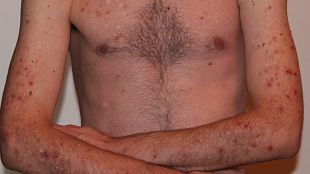 Compulsive Skin-Picking Disorder: Is There Any Hope?

Compulsive skin-picking, also referred to as excoriating disorder or SPD, has a prevalence rate between 2 and 5%. Despite its relative common occurrence, this disorder is poorly understood and there are no FDA approved treatments. SPD leads to noticeable tissue damage, psychosocial problems, reduced quality of life, and medical problems such as infections.

In other compulsive disorders, the pathophysiology has implicated a glutamatergic dysfunction. Previous research on trichotillomania showed that N-acetylcysteine, a well-tolerated amino acid available without prescription, may increase extracellular levels of glutamate in the nucleus accumbens. Restoring the extracellular glutamate concentration in the nucleus accumbens is thought to then block the need for compulsive behavior. A recent study published in JAMA Psychiatry sought to apply these findings to SPD. The hypothesis was that N-acetylcysteine would ameliorate the symptoms of SPD. The results of the double-blind study showed that indeed, N-acetylcysteine was more effective than a placebo.

The N-acetylcysteine treatment primarily reduced the urge to pick rather than the actual behavior. Treatment did not result in statistically significant improvements in measures of psychosocial functioning or quality of life. Though this study provides promising results for treating a complex disorder, the authors note that there were several limitations. The study was small and did not allow for complete evaluation of the benefit/risk balance. The authors also state that SPD is a chronic disease that likely requires treatment beyond 12 weeks. Psychotherapy, particularly cognitive behavioral therapy, has shown benefit and should be considered in conjunction with medication.

Summary: Results of a double-blind study showed that N-acetylcysteine was more effective than a placebo in reducing the urge to pick.