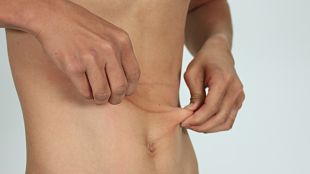 Irritable Bowel Syndrome (IBS) has traditionally been thought of as a functional disease, but recent research has implicated chronic inflammation as a possible cause. A change in peripheral cytokine profiles in IBS has been observed, and the role of inflammation in gastrointestinal motility is an area of active research. If inflammation is the cause, isolating the source could lead to patient relief. About half of IBS patients report their symptoms worsening after ingesting certain foods. A recent study postulated that allergenic foods and food additives may elicit a similar allergic reaction in the gastrointestinal tract in some individuals, resulting in allergic contact enteritis, and giving rise to symptoms suggestive of IBS. Therefore, if a skin patch test was administered the specific allergen could be identified and avoided.

In the study, skin patch testing was performed on individuals with physician-diagnosed IBS or symptoms suggestive of IBS. Participants who demonstrated 1 or more doubtful or positive patch test results were placed on an avoidance diet for 1 week, avoiding the food(s)/food additive(s) to which they reacted, to determine whether avoidance of the suspect allergen(s) alleviated their gastrointestinal symptoms. Of the 30 participants who had at least 1 doubtful or positive patch test result, 9 reported no improvement, 3 slight improvement, 8 moderate improvement, and 3 reported great improvement with dietary avoidance.

The authors conclude that food-related type-4 hypersensitivity should be considered in the pathogenesis of IBS and chronic undifferentiated IBS-like symptoms. Further, skin patch testing may be effective to detect the allergens responsible. By using a patch test for some patients, such testing may reduce the use of more costly, more invasive endoscopic, radiologic, and laboratory testing and establish dietary avoidance as a viable treatment modality for these individuals.

Source: Journal of the American Academy of Dermatology (JAAD)
Adapted from the original article.