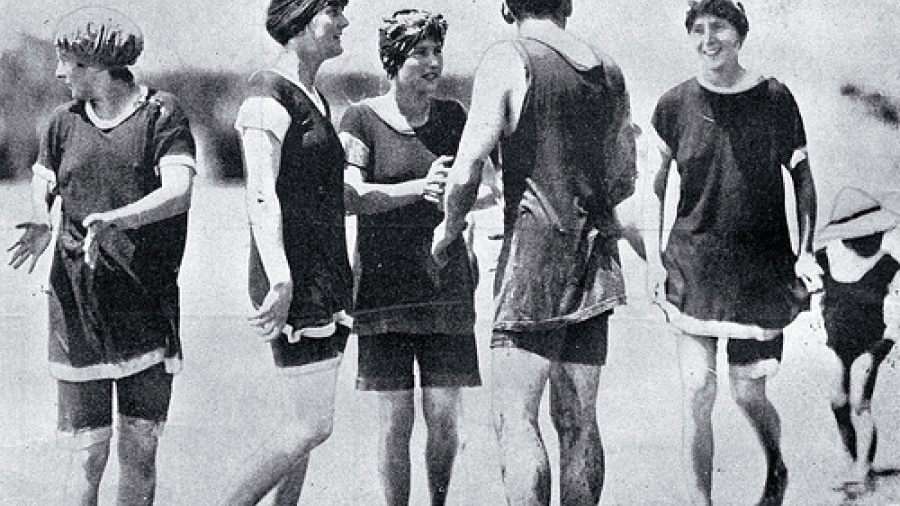 A Century Worth of Trends Linked to Rising Melanoma Rates

The alarming increase of melanoma cases over the past century led a research team from New York University (NYU) to analyze various cultural and socioeconomic changes from the early 1900s until now in order to see if there was any correlation between social change and UV radiation exposure and melanoma. Their analysis and findings, called “More Skin, More Sun, More Tan, More Melanoma” was recently published in the American Journal of Public Health’s October issue.

The study’s authors explain that the early 1900s was “the era of porcelain beauty.” Many people avoided tanned skin for the stigma that was associated with manual labor: they used parasols, layered clothing and covered their skin with lotions that contained white petroleum, almond oil and heavy powder made of magnesium, zinc oxide or bismuth. Even bathing suits exposed only 23% of men’s and 18% of women’s total skin surface.

At the turn of the 20th century, scientists began treating diseases—such as rickets, tuberculosis, and skin lesions like lupus vulgaris—with sunlight therapy or “heliotherapy.” The effectiveness of the new therapy positively influenced the public’s perception of sunlight, and even caused the medical journal Lancet to state, “The face browned by the sun is regarded as an index of health.”

Over the next several decades, dermatologists expressed concerns about the public’s increased exposure to UV radiation, but the popularity of “sun worshipping” continued to grow.  By the 1920s, having a tan became a fashion statement and a symbol of wealth as leisure time increased dramatically. Between 1880 and 1940, the average workweek fell from 62 hours to 42.5, and many jobs began including paid vacations. With newly acquired leisure hours to fill, outdoor activities became popular, and to meet the demand, communities across the US built parks, tennis courts, baseball fields and swimming pools. Sportswear was designed to outfit these new activities, and were more revealing than ever. Swimwear now exposed 47 percent of the skin surface of both men and women.

As a direct result of fabric rations during World War II, clothing continued to evolve into more revealing fashions: T-shirts became acceptable outer wear for men, and two-piece bathing suits became acceptable for women to wear in public. In 1946, a French designer introduced the bikini (which the U.S. widely accepted by the 1960s), now exposing 80% of women’s bodies, and normalizing men swimming bare-chested.

The study’s authors state that the increase in warm travel destinations, greater access to outdoor activities and amusement parks, and participation in organized sports during this time period was a means of promoting “the American way of life” during the Cold War.

Research on the strong correlation between tanning and developing skin cancer led to a rapid development and marketing effort of sunscreens, which the public believed would completely protect them from the sun’s harmful rays. Still, the rates of melanoma continued to rise.

Surveys at the start of the 21st century indicated that over half of Americans believed that people look healthier with a tan, a perception which, as the authors state, “stands in stark contrast to the negative social context of tanned skin that defined the early 1900s.” The idea that “tan skin is beautiful” continues to perpetuate revealing fashions and sun worshipping behaviors, and has even created a new trend that allows the public to tan more conveniently: indoor tanning beds.  The study states, “In 1981, 10 new tanning centers opened each week in the U.S., and by 1988, there were more than 18,000 such centers across the country.” Currently, almost 28 million Americans use indoor tanning beds each year, most of which are teenage girls and/or young women, which the authors link to the 3.6% increase in melanoma rates among women aged 15 to 39 each year

The investigation shows that sun exposure is greatly shaped by a culture’s attitudes and behaviors, and the study’s authors state, “Identifying the roles and historical forces (including gender and social class differences) that contribute to the growth and persistence of public health problems may help to target interventions to effect disease epidemiology in a positive fashion” and “lead to public health and educational measures that may ultimately help reverse melanoma incidence trends.”